Tempted by the Wrong Twin is the 8th book in The Texas Cattleman’s Club: Blackmail series. They are: 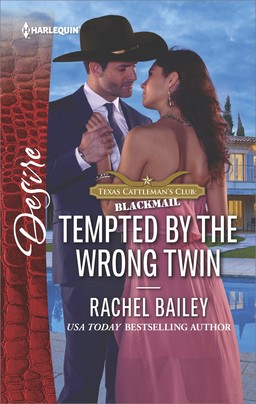 When his twin brother’s name flashed on his cell phone screen, Nick Tate accepted the call—it was pretty much the only number he didn’t let go through to voice mail these days.

Before he could even offer a greeting, Malcolm’s voice thundered, “Goddammit, Nick. You slept with our lawyer, didn’t you?”

The blood in his veins froze. There was only one woman he’d slept with since he’d returned from his last tour of duty, and they hadn’t stopped to share life histories. They hadn’t even stopped to exchange names. And now it seemed as though that had been a mistake.

“Harper Lake has been Tate Armor’s company attorney for just over two years.”

Nick winced. That was the problem with being a silent partner in their business—he missed out on all the details. And it turned out that their lawyer was one hell of an amazing detail. It had been three months since their night together and he still hadn’t stopped thinking about her, but he’d had no way to track her down. Until now.

“And,” Malcolm continued, “it seems you didn’t tell her who you were. She thinks she slept with me.”

Nick swore under his breath. Most people couldn’t tell them apart at the best of times, but add a half-face mask–since it had been a masked ball–and his pretending to be Malcolm, and the task would have been virtually impossible. They hadn’t switched identities since they were kids, but when Nick had heard that a disgruntled customer had threatened his twin and would be stalking him at the ball, he didn’t hesitate to step in and make things right. It had been going on for several weeks, and enough was enough. He might not be good for much anymore, but this was something he could fix for his brother. Even if it had meant dragging his sorry ass out of seclusion.

So, yeah, since Harper knew Malcolm, she must have mixed Nick up with him that night. He just hadn’t realized it at the time. Their connection had been instant and explosive, and there hadn’t really been time to explain. Or even make it to the bed.

Despite the annoyance emanating from his brother on the other end of the phone, Nick smiled at the memory. He’d never met anyone remotely like Harper Lake.

But now wasn’t the time for reminiscing. He pulled himself together and addressed the problem at hand. A rare night of letting go had created consequences for his brother, the twin who’d always had enough finesse and charm for them both.

“I’ll handle this, don’t worry.” Now that he knew her name and where she worked, he’d be able to talk to her. Maybe he could wait for her after work tomorrow. Or perhaps he could drop in at lunch and offer—

“This isn’t some simple glitch that you can ride in on your white horse and sort out, Nick.”

Something in Malcolm’s voice had Nick’s SEAL training kicking in, and his entire body went on alert. “What do you mean?”

The power of the word hit him square in the chest. Pregnant? Only his training kept him on his feet as the world tilted around him.

Harper was pregnant with his baby.

And then a second wave hit him with even more force than the first. Ellie. His three-year-old daughter—the only reason his heart still beat after the horrors of war had pummeled it—could suffer the fallout of his behavior. His ex-wife’s lawyers would use this to further their case that he was an irresponsible and unfit father. Especially if they knew the circumstances of how he’d swapped identities with his brother. His temples throbbed, and he rubbed them with his free hand.

Dammed if he was going to let them take Ellie from him. He’d fix this. Fix it for all of them.

He jerked his wrist over to check his watch. It was almost seven. “Are you at work? Is Harper still there?”

“She just left,” Malcolm said. “She waited until everyone else had gone for the day and came into my office. She said she wanted me to know and offered to do a paternity test if I wanted.”

He could see the scene playing out in his mind, and he hated it. Hated that he’d put his brother in that awkward position, but mostly hated what he’d done to Harper. What must she be feeling? Cursing him—or the Malcolm version of him—at the very least. She was probably overwhelmed.

He had to swallow hard to get his voice to work. “Did you tell her you weren’t at the masked ball? That it was me?”

“I said I had to go, apologized and promised we’d talk about it in the morning. She seemed taken aback, but I figured it was your job to tell her.”

“You figured right.” This situation was complex enough without her getting the details from his brother.

“You know how dangerous this is, don’t you?” Malcolm said, his voice a note lower than it had been. “You’re an owner of the business, and sexual harassment cases are no laughing matter.”

“Yeah, I get it.” Nick had always been responsible, even when he was a kid, so he’d never thought he’d be the guy his brother would have to give this talk to, and it sat uncomfortably.

“Plus, with this Maverick guy going around town spilling everyone’s secrets, don’t count on this situation being private for long. He might already know.”

Nick frowned. He might have been out of the loop, but even he had heard about the blackmailer causing headaches and heartaches for people all over Royal. Still, it was a little premature to be thinking about interference here.

“How could he possibly know when I only just found out?”

“How did he know that Wes Jackson had a kid with Isabelle Grayson? How did he know about Cecilia Morgan’s background? He’s obviously got some serious hacking and investigative skills.”

“True,” Nick said on a sigh. Local businessman and manufacturer Wesley Jackson was a friend of Malcolm’s and Nick had met him a few times. Wes and Isabelle were decent people who hadn’t deserved what Maverick had put them through.

“Also, all Maverick’s targets seem to be in the TCC, and since you and I are both members, we can’t discount the risk.”

“Hell.” Malcolm had a point. And the new proposals he’d been working on for the supply of body armor were all for security agencies. Given the nature of their business, handing Maverick ammunition to use on them in the form of a scandal like this would make them look like amateurs.

He blew out a breath. “Our clients need to know that any information they give us about their organizations is secure and not susceptible to a hacker.”

“Yeah,” Malcolm said, sounding weary. “Now is the time to have everything aboveboard. No secrets that could make us vulnerable.”

“I’m on it.” Nick grabbed his Kevlar riding jacket and slid his arms in, one at a time, switching the cell to his other hand as he went. “I’m going to need her home address.”

“Thanks. And Malcolm?” he said, glancing up at the ceiling.

Nick drew in a long breath and held it for a moment before replying. “I will handle this. I’ll make everything right.” There was no other option. He’d make things right for Ellie, for Harper, for Harper’s baby, for Tate Armor—for everyone.

Nick disconnected the call, grabbed his wallet and keys and headed out the door. Hell would freeze over before he’d ever let down someone he was responsible for again.

But by the time he’d reached Harper’s place—a “country cottage” that was far too impressive to deserve such a description—he was having doubts. How was he even going to convince her that he, not Malcolm, was the father of her baby?

Hey, Harper. Remember that night you thought you were with Malcolm and conceived his baby? Well, it was me. Surprise!

Harper, I have something to say and you might want to sit down. My name is Nick, and I was impersonating my twin brother when we met. I should have told you before things got out of hand, and I apologize.

He’d need to find much better words in the next thirty seconds or risk having the door slammed in his face.

He knocked on her front door, still having no idea how he could possibly explain everything. Then the door swung inward and she was there and he had no air left to form words anyway. Her almond-shaped brown eyes widened at the sight of him, and he knew he had to say something. Anything. But her haunting beauty overwhelmed him. He’d barely been able to stop thinking about her since that night, and now here she was in real life. Filling his vision. Smelling like heaven.

“Malcolm?” she said, her voice breathy, and instead of explaining, he found himself mute, reaching out to feel the silky-soft skin of her cheek. His palm cupped the side of her jaw, his fingers feathering over her cheekbone, and he was lost.

Her eyes widened in surprise and she took a small step back, out of his touch, but her gaze didn’t falter. He waited a beat, waited in agony, waited until she swayed back toward him, and then he reached for her again. Her lips parted as she tilted her head into his palm. The world around them faded, and he took an infinitesimal step closer, being drawn by the magnetic force that had been there since he’d first laid eyes on her three months ago.

He was supposed to say something, tell her something, but there were no words in his mind, only Harper and the way her eyes had darkened as she looked at him. Breathing ragged, he lowered his head and speared his fingers through her long, glossy hair. This was wrong, so wrong, yet the rightness of it overwhelmed him, crushing all other thoughts.

She lifted herself on tiptoes and met him halfway, her mouth finding his, her lips soft, welcoming, wanting, her arms wrapping around his shoulders and gripping tight. With a groan of surrender, he slid his tongue along hers and hauled her flush against him.

Of course, a little voice at the back of his mind whispered, this was also what had led him into trouble in the first place.

He had to stop kissing her. To find the strength to pull away and explain everything. Oh, but her mouth and what it was doing to his was divine…

Reluctantly, he eased back a little, then brushed his lips over hers one last time before straightening. She dropped her hands—all contact was broken—and he blinked hard to make his mind work. She gazed up at him, her eyes unfocused and her lips rosy from their kiss, and  previous thought deserted him. In that moment, all that mattered was that Harper Lake knew she’d kissed him. Knew she’d made love with him. Nick Tate.

So, with his voice as rough as gravel, all he heard himself say was, “I’m not Malcolm.”