Million-Dollar Amnesia Scandal is the second book in the Bramson Brothers. In order: 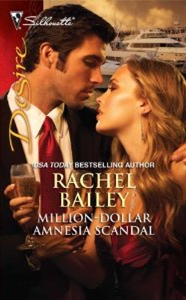 An accident left April Fairchild with no memory, ownership of a multimillion-dollar hotel and the nagging sense something wasn’t quite right in her life. It also brought her intensely sexy businessman Seth Kentrell, whose late brother had left her the property. Seth believed her a gold digger—and how could April deny it, when she couldn’t even remember her name? Now Seth was ready to play hardball to get the hotel back.

But April knew enough to refuse to sign over the property until her memory returned. And if that meant Seth needed to persuade her…well, that was something she could enjoy! At least until the whole truth came out….